Around two-thirds (65%) of practices believe abuse of staff has worsened in Scotland over the past year, according to a new BMA Scotland survey.

It also found that just 2% of practices feel things have improved.

The survey of practices, which had 420 responses and amounts to 46% of GP practices in Scotland, also looked at demand, capacity and vacancies within practices.

More than a third of respondents (34%) said they had at least one GP vacancy at their practice, which was an increase of 6% from the same survey last year.

Over 80% of practices also said that demand was exceeding capacity, with 42% saying this ‘substantially’ exceeded capacity.

Dr Andrew Buist, chair of the BMA’s Scottish GP Committee, said: ‘GPs continue to be under increasing pressure from their patients, with 65% of practices reporting levels of abuse towards staff have got even worse than this time last year.

‘I cannot make it clearer that this is simply not acceptable, and I implore everyone please do not blame general practice for this situation – the doctors, nurses and non-clinical staff are doing everything they can, they do not want to see their patients unhappy or struggling.’

He called on the government to ‘get on with’ their pledge to deliver more GPs in practices, as ‘things are not going to get better’ until there are.

He added: ‘While I appreciate difficulty getting an appointment can cause understandable frustration at times, it will never be acceptable when this spills over into abuse. No-one – least of all those people in caring services – should face abuse for doing the best they can in the extremely trying circumstances set out above.’

It comes after calls that media messages suggesting that it is ‘virtually impossible’ to see a GP need to end, as it is adding to the abuse of practice staff. 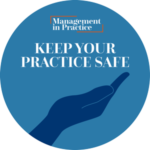 Management in Practice has launched a campaign to #KeepYourPracticeSafe as more GP practices across the country are facing abuse. In a series of articles, we will share how practices are responding to the issue and what can be done to help safeguard staff.

Managing patient abuse – how one practice removed its in-person reception

How to deal with aggressive patients

And if you would like to get more involved in our Keeping our Practice Safe campaign, express a view, share an experience or write a blog/other article on the subject, please get in touch with editor Rima Evans.